INDIANAPOLIS, May 6, 2021 /PRNewswire/ — In a nod to Indiana Pacers Center Myles Turner’s record-breaking NBA season, MTN DEW® is charging his campaign for the 2021 Defensive Player of the Year (DPOY) award. To fuel awareness in a big way, the brand is petitioning Mayor Hogsett to rename the city of Indianapolis to «Block City» – in reference to Turner’s epic on-the-court blocks – in support of his candidacy. 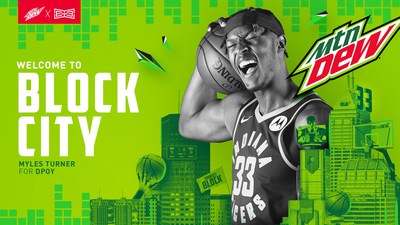 DEW is calling on fans nationwide to sign our petition at MylesTurnerForDPOY.com.

For the last six years, our guy Myles Turner has been crashing boards, breaking up plays and flat-out balling as the defensive anchor for the Indiana Pacers.

With an average of 3.4 blocks per game – an Indiana Pacers Franchise record, contesting the most shots at the rim – 13.2 rim contests out of 100, and averaging 0.9 steals, Turner’s not just the best defender on the court this season – he’s single-handedly turned the city of Indianapolis into «Block City,» hosting nightly highlight reel block parties against the best the NBA has to offer. But despite his historic on-court performances, he still isn’t getting the recognition for 2021 NBA Defensive Player of the Year (DPOY) he deserves. That’s why we need your help.

We say, it’s time to call the shots in support of Turner’s DPOY campaign. We, MTN DEW, DEW Nation, the Indiana Pacers and the fans, are formally petitioning Mayor Hogsett and the city of Indianapolis to throw the full support of the community behind Myles and lift him above his DPOY peers by:

Renaming the City of Indianapolis «Block City» for a day, in Turner’s honor

Nobody balls for that block like Turner, so please sign and share this petition to help us seal the deal and spread the word. Together, let’s make «Block City» a reality and show Myles Turner some hometown love when you help us charge his campaign for the 2021 NBA Defensive Player of the Year.

«DPOY is something I’ve been working towards year in and year out. Just like I do every season, I’ve been balling for every block and leaving it all on the court,» said Myles Turner, Indiana Pacers. «I’m pumped that MTN DEW is making a case for me to win DPOY can’t wait to interact with my fans and the City of Indianapolis on a deeper level.»

Added Turner, «Even though I’ve had to miss a few games late in the season, I’m looking forward to getting back and helping my team with a playoff push.»

To further support Turner and generate awareness tied to his DPOY campaign, MTN DEW is donating 200 packages of essential items, including water, food, toiletries and blankets to his charity, W.A.R.M. (Work As Role Models). All donations will support Indianapolis residents in need.

«MTN DEW is always on the hunt for boundary-breaking sports activations, especially around basketball, that help bring us even closer to our fans and consumers,» said Umi Patel, CMO, PepsiCo North Division. «Myles Turner is a hero in Indianapolis and it’s an incredibly important market for PepsiCo – so what better way to engage with the community than by fueling his DPOY campaign? Turning Indianapolis into «Block City» is our way of getting our badass fans involved and continuing to make a lasting impact, both on and off the court.»

PepsiCo products are enjoyed by consumers more than one billion times a day in more than 200 countries and territories around the world. PepsiCo generated more than $70 billion in net revenue in 2020, driven by a complementary food and beverage portfolio that includes Frito-Lay, Gatorade, Pepsi-Cola, Quaker, Tropicana and SodaStream. PepsiCo’s product portfolio includes a wide range of enjoyable foods and beverages, including 23 brands that generate more than $1 billion each in estimated annual retail sales.

Guiding PepsiCo is our vision to Be the Global Leader in Convenient Foods and Beverages by Winning with Purpose. «Winning with Purpose» reflects our ambition to win sustainably in the marketplace and embed purpose into all aspects of our business strategy and brands. For more information, visit www.pepsico.com.