NATICK, Mass., April 28, 2021 /PRNewswire/ — Joel Seth Aronson is a distinguished biographee of Marquis Who’s Who. As in all Marquis Who’s Who biographical volumes, individuals profiled are chosen from among a pool of the most prominent professionals and are selected on the basis of current reference value. Factors such as position, noteworthy accomplishments, visibility, and prominence in a field are all taken into account during the selection process. 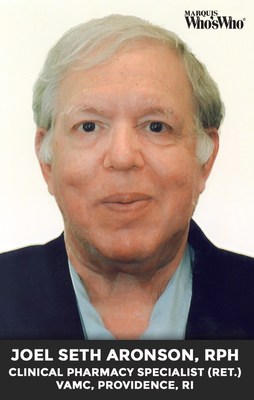 Drawn to a career in pharmacy due to his longstanding desire to help people, Mr. Aronson was further inspired by his grandfather, who was a pharmacist, as well as his early experience working in an Eckerd drugstore warehouse. He initially earned a Bachelor of Science degree in pharmacy from the College of Pharmacy at the University of Louisiana at Monroe in 1972. Soon thereafter, he refined his skills as a retail pharmacy intern with Steven’s Pharmacy and Brookline Pharmacy before obtaining his licensure as a pharmacist in the states of Louisiana, Massachusetts, and Florida. Mr. Aronson has subsequently excelled as an inpatient clinical pharmacy specialist and conducted considerable work verifying physicians’ orders in addition to discharging and counseling veterans.

Attributing much of his success to being compassionate and a good listener, Mr. Aronson has contributed his time and resources to a number of other professional endeavors over the course of his career. During his tenure with the Boston Medical Center, he was active as a member of the patient/family education steering committee and at the Providence VA hospital he worked and served as a volunteer trainer for pharmacy technicians, pharmacy students, and pharmacy residents throughout his career. In order to stay aware of developments in his field, Mr. Aronson maintained his professional affiliations with the American Pharmacists Association, the American Society of Health-System Pharmacists, the Massachusetts Pharmacists Association, and the Massachusetts Society of Health-System Pharmacists.

As a testament to his achievements throughout his career, Mr. Aronson has been presented with a number of honors and accolades, including the I Care Leadership Award pin from the United States Department for Veterans Affairs. However, he cites his greatest accomplishments as his ability to do the right thing and train people so they can help others. Some additional highlights of Mr. Aronson’s career include helping to manage the weekend and evening schedules for his fellow pharmacists, the commendation he received for working during a blizzard in 1978, being elected as a union shop steward to represent the pharmacy department at both Boston City Hospital and Boston Medical Center, and preventing an attempted armed robbery of narcotics from the pharmacy at the Boston City Hospital.

About Marquis Who’s Who®:

Since 1899, when A. N. Marquis printed the First Edition of Who’s Who in America®, Marquis Who’s Who® has chronicled the lives of the most accomplished individuals and innovators from every significant field of endeavor, including politics, business, medicine, law, education, art, religion and entertainment. Today, Who’s Who in America® remains an essential biographical source for thousands of researchers, journalists, librarians and executive search firms around the world. Marquis® publications may be visited at the official Marquis Who’s Who® website at www.marquiswhoswho.com.