LOS ANGELES, Aug. 5, 2021 /PRNewswire/ — Jellysmack, the global creator company, announces the addition of Youri Hazanov to its leadership team as Head of International. Hazanov joins the fast-growing tech business with a decade of experience after overseeing the international launch of YouTube in over 20 countries. 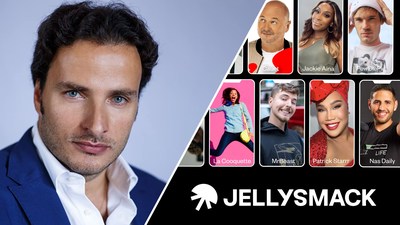 This news reinforces Jellysmack’s commitment to a global expansion strategy announced upon the closing of its Series C round in May 2021. Hazanov will be developing the Jellysmack business in key markets across Europe, Asia-Pacific, the Middle East, and Latin America.

«When I started at YouTube in 2010, the majority of creators were based in the U.S.,» said Hazanov. «Ten years later, the majority were international. There’s a massive opportunity for Jellysmack to reach these international creators, and I’m thrilled to be leading the charge.»

Hazanov’s focus will be signing new international creators to the Jellysmack Creator Program, a solution that leverages the company’s proprietary AI technology and first-party data to help individual video creators grow their audiences across multiple social platforms. The Creator Program currently has over 250 creator partners, including megastars PewDiePie, MrBeast, and Cauet, plus fan favorites like Patrick Starrr, Bailey Sarian, and Nas Daily. Jellysmack uses its technology and team of experts to edit, optimize, and distribute videos onto Facebook, Instagram, Snapchat, TikTok, and YouTube on behalf of the creator, establishing new revenue streams.

To build out the international team, Hazanov has brought on two additional senior leaders. Harry Levy, formerly of Taboola and Google, will focus on EMEA and LATAM as Head of Sales and Partnerships. Former Universal Music & Expedia executive Laurent Hulin will oversee the APAC region as General Manager.

«To be the definitive global creator company, we have to expand our global presence,» said Hazanov. «Jellysmack has a proven approach and technology solution for growing creators across social platforms that no one else has, so it’s now about getting the right people into those regions where we are seeing the biggest opportunities within the creator economy.»