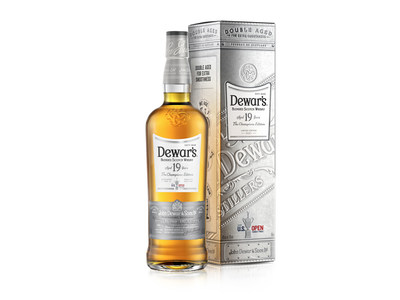 Created by DEWAR’S award winning Master Blender Stephanie Macleod, DEWAR’S «The Champions» Edition is the first of its kind inspired by the rich legacy and ethos of the U.S. Open®, «From Many, One». The award-winning Scotch whisky embodies this through blending double aged grain and single malt whiskies to create one, with the resulting liquid for this rare edition featuring rich notes of honey, toffee, vanilla and ripe cherries. Supple and complex, the aroma opens with toffee popcorn and soft panna cotta, balanced with floral notes of freshly cut grass.

The silver bottle design is also a nod to the U.S. Open® trophy, reflecting the «Champions» namesake of this special offering designed specifically for the 121st U.S. Open Championship®, which takes place at Torrey Pines on June 17-20. Part of the bottle proceeds will go towards the USGA Foundation, which celebrates, serves and advances the game of golf.

«We’re thrilled to launch the DEWAR’S 19-year-old «The Champions» Edition bottle, right in time for the 2021 U.S. Open® and Father’s Day. Designed for golf and whisky aficionados alike, this first of its kind blend is inspired by our exciting partnership with the U.S. Open®, as well as our sporting legacy and commitment to supporting ‘champions’ in all endeavors. They hold the same passion, tenacity and commitment to their craft that we do,» said Brian Cox, Vice President of DEWAR’S North America.

This marks the first release in the series. As part of their multi-year agreement, DEWAR’S will produce a commemorative bottle edition each year until 2023 as the official blended scotch whisky and proud supporter of the US Open Championship®.

DEWAR’S «The Champions Edition» is available in extremely limited quantities and can be found in select fine wine and spirit retailers or on ReserveBar.com from late May through Father’s Day, the final round of the 2021 U.S. Open®.

This blend and partnership continues DEWAR’S deep ties to the sports world, where it has sponsored numerous sporting events, competitions, and teams across the globe since the 1890s. For more information on DEWAR’S Portuguese Smooth and the rest of DEWAR’S whisky products, please visit www.dewars.com or on Facebook, Instagram and YouTube.

Limited edition bottles on shelves nationwide in select fine wine and spirit retailers or on ReserveBar.com from late May 2021
MSRP $79.99 (750 mL each)
ABV: 43%

About DEWAR’S
Founded in 1846 by John Dewar, DEWAR’S has grown from a small wine and spirits merchant shop in Scotland, to one of the largest Scotch whisky brands in the world. Best known for its iconic DEWAR’S WHITE LABEL, it has expanded its family to create a portfolio of premium and super premium whiskies including DEWAR’S 12-Year-Old, DEWAR’S 15-Year-Old, DEWAR’S 18-Year-Old, DEWAR’S Double Double Series, DEWAR’S Caribbean Smooth and the exclusive DEWAR’S 25. These whiskies are crafted using the DEWAR’S oak marrying ageing process, which involves returning the hand-crafted blend to vintage oak casks for further maturation. The result is a smoother taste with a long, lingering finish; a taste that wins medals and applause, making DEWAR’S the world’s most awarded blended Scotch. The DEWAR’S brand is part of the portfolio of Bacardi Limited, headquartered in Hamilton, Bermuda. Bacardi Limited refers to the Bacardi group of companies, including Bacardi International Limited.

Founded more than 158 years ago, in Santiago de Cuba on February 4, 1862, family-owned Bacardi currently employs nearly 7,000, operates more than 20 production facilities, including bottling, distilling and manufacturing sites in 11 countries, and sells its brands in more than 170 countries. Bacardi Limited refers to the Bacardi group of companies, including Bacardi International Limited. Visit www.bacardilimited.com or follow @BacardiLimited.