LOS ANGELES, June 10, 2021 /PRNewswire/ — With baseball fans returning to ballparks this spring, the Prostate Cancer Foundation (PCF), Major League Baseball (MLB), and Joe Torre – Hall of Fame Manager and MLB Special Assistant to the Commissioner – are teaming up for the 25th Annual Home Run Challenge and Tour through Father’s Day, June 20th, to bring awareness about the fight against prostate cancer through America’s National Pastime. 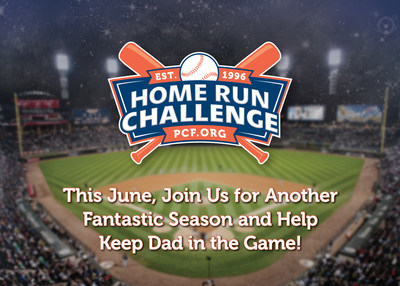 This year, in memory of the remarkable legacy of HRC ambassador and baseball great Tommy Lasorda, who joined Mike Milken on the Home Run Challenge tour for 24 of its 25 years, PCF has created the Tommy Lasorda All-Star Award to fund the most promising prostate cancer research. Baseball fans may also donate to the HRC in memory of Lasorda and support the award.

«One man dies from prostate cancer every 15 minutes – that’s about one player per inning. This is staggering and as a prostate cancer survivor, this is personal,» said Torre. «The Home Run Challenge has made great strides in raising awareness about prostate cancer and I am pleased to be a part of this important effort. When you support Prostate Cancer Foundation research, you help save lives – maybe even your own.»

PCF’s Home Run Challenge campaign ambassador Joe Torre, alongside PCF Chairman and prostate cancer survivor Mike Milken, will make a special appearance on two Home Run Challenge Tour stops: June 13 at  the New York Yankees vs. Philadelphia Phillies game at Citizens Bank Park in Philadelphia, and June 14 at the Baltimore Orioles vs. Cleveland Indians game at Progressive Field in Cleveland. The tour provides in-game messages about prostate cancer and encourages fans to step up to the plate to support research into a disease which will strike one in eight men this year.

Torre’s famous public service announcement is being re-released for the 25th Anniversary to raise awareness about prostate cancer and encourage Americans to support the campaign. View Torre’s PSA at https://www.pcf.org/take-action/home-run-challenge/.

«We are grateful to MLB for being our long-standing partner in helping us raise awareness and support for much needed prostate cancer research, and to Joe Torre serving as the ultimate ambassador,» said PCF President and CEO Jonathan Simons, MD. «Significant advances have been made in the battle against prostate cancer, but there is still much work to be done to achieve a cure. The Home Run Challenge is critical in helping us continue to fund the groundbreaking research that will save mens’ lives.»

Blue is the official color for prostate cancer awareness and MLB players, managers, coaches and on-field personnel will lend their support in solidarity by wearing New Era specially designed caps featuring blue Club logos and a blue MLB ribbon. A matching pair of Stance socks is available for every player. On-field personnel will don blue wristbands and blue decals on Nike jerseys. Proceeds will benefit Stand Up to Cancer and PCF through sales royalties/donations of on-field Authentic Collection Father’s Day apparel.

Baseball fans are also encouraged to continue showing their support by uploading a selfie on social media channels taken at a game wearing blue or their favorite MLB team’s jersey or cap using #HomeRunChallenge and/or #KeepDadintheGame.

As a charitable partner of MLB for more than two decades, proceeds from the Home Run Challenge will help PCF continue its efforts to fund cutting-edge prostate cancer research, as well as inform and raise awareness about the disease.

For more information about the Home Run Challenge, visit www.HomeRunChallenge.org.